To obtain protection for trademark in Vietnam, an applied mark must undergo formality and substance examination and be published on the Vietnamese Industrial Property Gazette for any third-party to carry out the opposition procedure.

In the substance examination procedure, an applied mark will be examined based on two criteria Absolute Ground and Relative Ground. With the criteria in the Relative Ground, the assessment of the similarity between marks is the most complicated, bearing many subjective opinions of the IP consultants as well as trademark examiners. Within the framework of this article, we would like to highlight some principles that need to keep in mind when assessing the similarity between trademarks in Vietnam.

In order to concretize the legal provisions stipulating the confusing similarity between two marks, the Ministry of Science and Technology of Vietnam promulgated the Circular No. 01/2007/TT-BKHCN dated February 14, 2007 detailing a number of criteria to evaluate whether two marks are similar or not. Particularly, pursuant to Point 39.8a of Circular 01/2007/TT-BKHCN: To assess whether or not a sign is identical or confusingly similar to another mark (hereinafter referred to as cited mark), it is necessary to compare the structure, content, pronunciation (for character signs), meaning and form of presentation of the sign (for character signs and figure signs), and concurrently compare the goods/services bearing the sign with those of the cited mark defined at this Point.

According to the above regulations, the assessment of similarity between marks should be based on the following two factors:

(i) Is the applied mark identical or confusingly similar to another mark that has been previously filed/registered in Vietnam? and

(ii) Are the goods/services bearing the applied mark identical or confusingly similar to those of the previously filed/registered trademark in Vietnam?

The assessment of these two factors should be based on certain principles as prescribed by Vietnam Intellectual Property law in the following cases:

1. A sign is identical to the cited trademark in Vietnam and their goods/services are identical to each other

For example: Trademark “ANMIA” designated for goods “cosmetics” in class 03 was filed on March 01, 2017 and has granted certificate No. 1234 on March 02, 2019. If there is a trademark application for the mark “ANMIA” designated for the same goods “cosmetics” in class 03 filed after March 01, 2017, it will be refused because of being identical to the prior mark under Reg. No. 1234.

2. A sign is identical/similar to the cited trademark in Vietnam and their goods/services are identical or similar to each other

Therefore, only one factor similar to a cited mark (such as content) may be sufficient for IP Office of Vietnam (IPVN) to refuse the protection of the applied mark, if the similarity may cause confusion for consumers on the origin of goods. 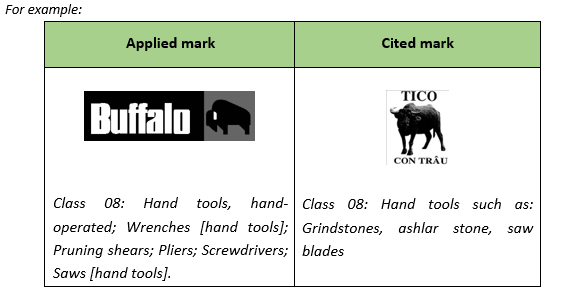 IPVN has refused to protection of the word part “Buffalo” because of being confusingly similar to the word part “CON TRÂU” of the cited mark and they were designated for similar goods (Buffalo in Vietnamese is “CON TRÂU”).

3. A sign is identical or similar to the cited mark being a well-known trademark in Vietnam

In other words, a sign that is identical or similar to a well-known mark may be not protected, even if their designated goods are different from each other.

For example: An applied mark for “HONDA” designated for goods “Confectionery” may be refused by IPVN because of being confusingly similar to the well-known mark “HONDA” for goods “motorcycles, automobiles”.

Since the number applications of trademark in Vietnam is increasing significantly every year, in order to make sure that your applied mark is not similar/identical to any prior registered marks or to estimate the possibility of success in registering trademark in Vietnam, it is highly recommended to conduct a full similarity search before filing in order to save time and cost as well as reduce possible risks in case of refusal.

You can see more details about trademark search in Vietnam in THIS ARTICLE.

In case you require more information or require advice to register trademark in Vietnam, Laos, Cambodia and Myanmar as well as other IP matters, please do not hesitate to contact us via email: info@ageless.vn

More information about trademark protection in Vietnam can be found HERE